Brigitta Fastrada (* at 765; † August 10, 794) is the mother of Frankfurt. Through her work Frankfurt, at that time still a nameless settlement, became the central venue of a European synod of priests, bishops and princes in 794 AD. Brigitta called and they all came. Although Brigitta Fastrada had already passed away at the time of the great gathering, her reputation would still be connected to the birth of the tourism metropolis that is Frankfurt for many years.

Over the centuries, countless people from all over the world came together in the place we know today as Frankfurt’s Old Town. Anyone who left their home and house behind and set off for Frankfurt followed the “Via Brigitta”. The practice of coming together made the centre of Frankfurt the lively heart of the soon-to-be rich fair city. Until the 20th century, the myth of Brigitta stayed in the cultural memory of the inhabitants and visitors. But at the end of the Second World War allied bombers destroyed the beating heart of Frankfurt. Due to the urban development policy of the post-war years, the once lively centre and its myth of Brigitta fell into decades of a Sleeping Beauty siesta.

Since 2012, the city of Frankfurt has been reconstructing the medieval city layout, making it possible for its citizens and numerous international guests to (re)experience the myth of Brigitta.

The miracle of Brigitta’s rediscovery and revival obliges people today to revive and appropriate the new old town. The Via Brigitta starts at every door and needs the community to carry its spirit into the 21st century. 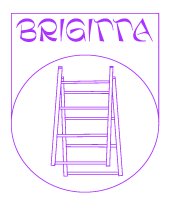